To celebrate the 110th anniversary of Richmond Theatre the Richmond Theatre Trust developed a two strand project with the aim of honouring the theatre’s history and building excitement about its future.

Tender Souls
The first part saw a group of young people writing a play inspired by people’s memories of the theatre. The project generated a great deal of interest and in the spring several outreach workshops took place in local schools and youth clubs. 25 young people who had taken part in the outreach workshops were invited to a final selection workshop, and of those, 11 were selected to take part. The young people conducted oral history interviews with current and former staff, actors and audience members. They participated in weekly writing workshops with playwriting facilitator Mark Griffin, and training sessions with the V&A and the Oral History Society, and shaped their research into scenes exploring the theatre’s history. Five professional actors were recruited to take part in a performed reading of the finished play, with acclaimed actor David Burt taking on the lead role of theatre architect Frank Matcham. The performance was attended by over 400 people, and was a great success, capturing the spirit of Richmond Theatre, and celebrating its rich heritage. A script of the play is available.

Those who were not selected for the main project were invited to take part in a subsidiary project, a site specific performance that took place on the theatre’s Open Day.

Richmond Theatre Through The Stages
The second strand of the project engaged a group of ‘workless’ adults, to create an exhibition about the theatre. Having attended a number of training sessions in curatorship both at the Museum of Richmond and the V&A, they collected stories and artefacts to feed into the exhibition, working closely with RT’s Honorary Archivist Norman Fenner. Richmond Theatre through the Stages opened at The Museum of Richmond on the 18th September 2011. A number of the volunteers worked with the Creative Learning Department and the Education Officer at the Museum to develop an education programme to support the exhibition. Over the course of the exhibition over 4500 people visited, a series of popular talks, workshops and tours took place with 2490 people taking part in educational activities, including school visits, talks, tours, and half term workshops. A number of the adults working on the project are still associated with Richmond Theatre and the Trust today.

These projects were made possible with a grant from Heritage Lottery Fund. 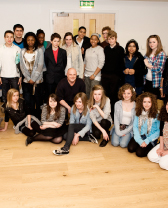 ‘I am writing to say how much we enjoyed Tender Souls on Thursday. What a wonderful, heartrending, amusing evening you gave us. It was beautifully written, and very well performed’ Vicki Naylor, Richmond Theatre Audience Member