In October 2017 we worked with Balletboyz and Achieving for Children to produce a brilliant project called ‘Trust and Fall’. We worked with young people from the local area and looked at building confidence and resilience through theatre and movement workshops.

The workshops began at Richmond Theatre with some ‘getting to know each other’ sessions. They then went to the fantastic Balletboyz studio in Kingston where they worked with the professional dancers. We used exercises that helped participants to build a relationship and trust between each other but to also build trust in themselves.

Once they felt more comfortable with the movement and each other the group worked with the professional dancers to devise a short movement piece which was performed to their friends and family at the end of the week. They used the theme of animals from the Balletboyz show Fourteen Days to inspire them.

The project was documented and the short film below was shown to audiences of Fourteen Days at Richmond Theatre.

We saw an incredible change in the participants across the sessions. Their confidence increased and we saw this in their interactions with each other and their body language. It was also wonderful to see the film, which they had contributed to, projected onto the Richmond Theatre Stage.

With thanks to Richmond Parish Lands Charity. 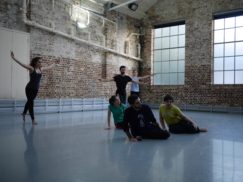 ‘I’ve become more confident with meeting new people, because I usually find that quite hard.’
‘My favourite thing was making new friendships and exploring who you are as a person.’
‘It’s been great overall and I’ve enjoyed it so much.’
‘I feel more confident in myself.’ Project Participants